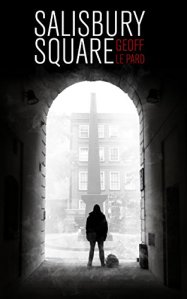 Set in London, Salisbury Square is a story that nevertheless unfolds a million miles away from the city many visitors know; The London Eye, St Paul’s Cathedral, cruising on the Thames… this is a different London.

Jerzy Komaza is also a visitor but he is Polish, he speaks no English and he’s on the run. After all the years of abuse, Jerzy finally had enough of the way his sister suffered at the hands of their father, back on their Polish Farm, and he killed him.

Now Jerzy has fled with a promise of work if only he can meet up with his cousin Jan in Salisbury Square. Immediately things begin to go wrong, Jan is nowhere to be seen and, when he sees she is in trouble, Jerzy goes to the aid of a young drug addict, Suzie. He is drawn into a new life of workgangs and drugs and acts of violence.

The story is told from several viewpoints and the cast of important characters is quite large. They take a little getting to know but soon the links between them begin to become obvious, their lives entwined in ways even they are not aware of. Told in short chapters the pace quickens towards an end that is surprising, original and somewhat inevitable.

Salisbury Square is a story of lives gone wrong and the far reaching effects on family and friends. It’s about people who care and people who don’t.

A gritty, interesting and, at times, poignant read that left me with lots to think about and to be thankful for.