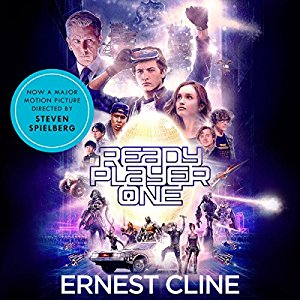 Set in 2045, the world is a sadly dangerous and depleted place and Oklahoma teenager Wade Watts lives in a dwelling known to residents as The Stacks. Though the author doesn’t go overboard with his description of this housing (and he does with lots of other descriptions) I quickly formed a vivid and overwhelmingly  depressing mental picture of the place. It’s understandable that anyone unfortunate enough to live there would need some kind of escapism.

Luckily,  James Halliday, eccentric, mega-wealthy and deceased, had made it his life’s work to invent Oasis, a virtual Utopia where everyone goes by their Avatar and life is good. In his will, Halliday leaves Oasis and all his millions to the person who can find the keys and unlock the Easter Egg, the ultimate prize.

A quirk that is vital to any chance of winning the prize is an in-depth knowledge of 80’s pop and games culture. Wade, in his avatar guise as Parzival has made it his mission to be an expert and has played 80’s games over and over in a bid to know every character and move. He thinks he has a serious chance of taking the prize but he is not alone, and some of those undertaking the quest are not as friendly or as honest as Parzival’s virtual best friend Aech, or Art3mis or Shoto and Daito.

There is a dark underbelly in the real world and they are determined to win.

Ready Player One is fun. It’s basically some computer characters wielding their swords and finding golden keys. But there is a huge amount of description, almost like a walk-through of a computer game and, despite excellent narration on Audible, at times I just wanted something to happen. This is a long book, longer, for me, than it needed to be. The 80’s stuff could be a bit wearing. At it’s heart is a love story, a good v evil battle, a dystopian nightmare of what the world might become. It’s the kind of book that I probably enjoyed more in the reflection of it afterwards, rather than some of the real-time reading. But it did make me reflect – and not all books do that.

2 thoughts on “Review Wednesday – Ready Player One by Earnest Cline”