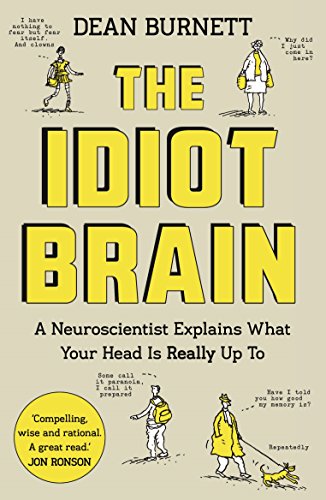 Dean Burnett is a neuroscientist with a sense of humour. In The Idiot Brain he attempts to describe the inner workings of our minds in a way that we can understand… that is, as far as anyone can understand. Burnett makes no apology about how little even ‘experts’ really know about the functioning of the brain.

Burnett uses the above quote to illustrate just how little is truly known about the organ that makes us what we are. But he goes bravely on to explain, in a brilliant way with words, what is known, or thought to be known.

The book is divided into chapters covering the various areas of the brain; the senses, fear, attempts to measure intelligence, memory and what can happen when things go wrong. It is an interesting and, at times, sobering read, despite Burnett’s sometimes hilarious turns of phrase. As someone with a loved one who has suffered a neurological/psychological disorder for the last four years, I know the frustration and heartbreak that such problems can bring. As I said before, for me, the most abiding message in this excellent book is that, despite research pushing the boundaries, so much still needs to be understood.

I enjoyed The Idiot Brain; I felt I learned something from it. Dean Burnett is a delight. In his introduction he tells us,

A former colleague once told me that I’d get a book published ‘when hell freezes over’. Sorry to Satan, this must be very inconvenient for you.

I am glad he persevered.

Reasons to Stay Alive is an important book. I know this because many reviewers who are also sufferers say it has helped them, that it is important to them, and they after all, should know.

I’ve read dozens of books on depression, old and new; some by doctors, others honest, personal accounts by those who suffer and have suffered.

Matt Haig, already an accomplished writer before he wrote this book, tells his own particular story very well. He talks about the confusion at the onset of his depression and the fear and debilitation it caused. He goes into great detail, he relates the awful challenges of simply maintaining an ordinary existence.

Reviews of the book by those affected by depression really bring home how much it can mean to read the account of someone who has gone through similar experiences and felt similar feelings. People with depression often feel very alone with their problem, unique even in the most horrible of ways, and finding that they are not is powerful.

Reading from the viewpoint of someone who is related to a sufferer is different. Reasons To Stay Alive and similar books can give hope and just a little bit more understanding. We can encourage our loved one to read the book and engage with it, see the sense and the hope in it, but don’t know if they will. But anyone who can articulate their experiences should keep writing books such as these. Let’s keep being open and honest about this devastating condition and hope the future can be brighter for many.